The quest for better energy efficiency is intensifying in 2016; the year in which the Paris climate conference agreement is presented for signature at the UN in New York. Developers are increasingly looking to Solid Oxide Fuel Cells (SOFC) to help reduce the carbon emissions associated with electricity generation because of its high conversion efficiency and suitability for distributed generation. Whereas conventional power station/transmission setups are limited to a maximum of 35% efficiency, SOFCs can achieve 60% and more. SOFCs also have the added benefits of long-term stability, a high fuel flexibility and a relatively low cost.

The high efficiency of SOFC’s can be mostly attributed to their operating temperature of 500 to 1,000 °C; which is significantly hotter than conventional cells. This high temperature means expensive platinum catalysts are not required and, instead, significantly cheaper materials can be used. The high temperature also means SOFCs have a high energy density. Unfortunately, the energetic conditions that the high temperature results in can cause several technical challenges; this is especially true for planar fuel cells.

Like other electrochemical systems which produce electricity by fuel oxidation, SOFCs are composed of an anode, a cathode and electrolytes. These components are compartmentalized to protect the integrity of the cell, and this requires a sealant. Due to the extreme temperature, and the sandwich design of planar SOFCs, the sealing of cell compartments is difficult. Creep, oxidation and high temperature corrosion are problems which make regular flat gasket seals entirely unsuitable. An added complication is the difference in thermal expansion coefficients (CTE) between compartments, which can lead to stresses that cause the seal to crack.

These factors have made the use of ordinary glass sealants problematic. Despite providing the strength and insulation required, regular heat-resistant glass can develop thermal cracks. These cracks effect hermaticity (how ‘airtight’ each compartment is); which can impair the electrochemistry of the cell – resulting in cell failure.

Special glass sealants have been recently developed to address this problem; in particular Glass-ceramic seals and Viscous Compliant Glass seals.

Glass-ceramic seals are common in the electronics and fuel cell industry. The glass is applied at the interface between separate components and is then fired. Upon firing, the glass crystallizes, forming a strong ceramic bond between the different components. Matching the thermal expansion rates (described by the coefficient of thermal expansion, CTE) is important as if the different components expand and contract at different rates the chance of seal failure is increased.

This problem is especially prevalent in SOFCs where regular cycling between room temperature and temperatures of more than 500 °C means glass-ceramic seals have a tendency to undergo thermal cracking. The high chance of cracking means SOFCs with a glass-ceramic seal have relatively short lifespans. The short lifespan has been cited as one of the key reasons SOFCs have been not become ubiquitous in the modern world, despite their extremely high efficiency. Thus, MO-SCI produces glass-ceramic seals with the requisite thermal properties (e.g., CTE, softening point) customized for various SOFC components. 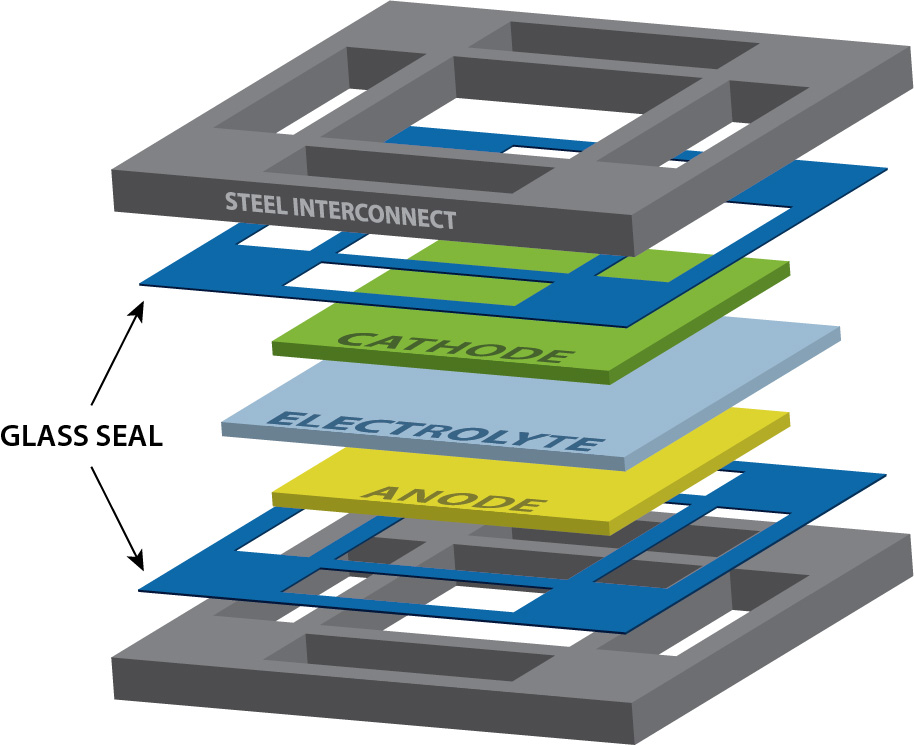 Viscous compliant seals are made of glass compositions that resist crystallization and remain in an amorphous, glassy state during their operation. The glassy behavior means that the seal is able to heal itself if a crack occurs; as a crack forms the surrounding glass spreads to occupy the new gap.

This behavior means viscous glasses are very appropriate for use in SOFCs which undergo frequent thermal cycling. This behavior also reduces the necessity for an exact CTE match as the glass can flow to fill any gaps as components expand and contract upon heating and cooling.

The production of viscous glasses, to be used as SOFC seals, has been the focus of intense research at Mo-Sci Corporation. The Missouri-based company has developed glass that can bond to both metals and ceramics, with the composition of the glass tailored so it hinders crystallization and remains glassy. Viscous glass seals stay vitreous even at operating temperatures of over 800 °C.

Research commissioned by Mo-Sci Corp and managed by the U.S. National Energy Technology Laboratory (NETL) has shown promising results. The study has shown that self-healing occurs in glass seals cracked by thermal shock at temperatures as low as 700-740°C. The study also highlighted the longevity of the seals themselves; the seals were held at 750 °C in both wet and dry environments for over 2000 hours with no significant weight loss.

Mo-Sci have developed a new glass seal that has survived 148 thermal cycles over the course of >5,000 hours with no failure of the hermetic seal. Each thermal cycle involved the temperature changing between 27 °C to 800 °C whilst at a constant pressure of 0.5 psid.

These results are going to revolutionize SOFC technology as seals will be achieve to operate reliably over an extended lifetime. The company, who are the sole developers of this technology, hope that their viscous sealing glasses will help contribute towards the development of fuel cell-based near-zero emission coal plants.

The uptake of SOFCs into the wider energy industry will change the energy landscape.